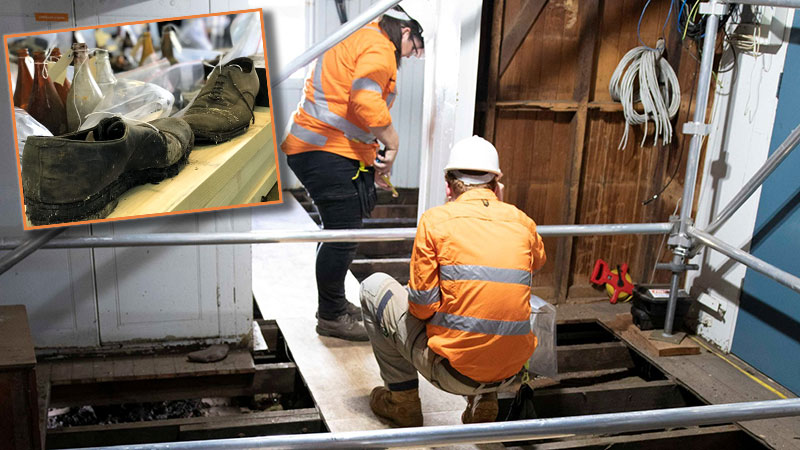 Queensland Rail project workers have been transported back in time, with hundreds of objects uncovered in the subfloor of Shorncliffe train station.

The heritage items, including train tickets, clothing, newspapers, and milk bottles dating back to the 1950s, were found during investigations of the 1912 station building, ahead of a major restoration program.

Member for Sandgate, Stirling Hinchliffe, said the items were an exciting find for the project team, painting a nostalgic picture of life in the 1950s in Queensland.

“More than 400 items have been unearthed from the subfloor of Shorncliffe station, from train tickets, newspapers and 1950s bottles, to a gas lamp, watering can and clothing,” Mr Hinchliffe said.

“When the project team started investigations into the structure of the building, to help inform their scope of works, they certainly didn’t expect to uncover a piece of history themselves.

“This collection of items provides an interesting glimpse into Shorncliffe’s local history, with many of the items, including cordial and milk bottles, coming from local Brisbane factories during that era.

“Many of the artefacts were found wrapped in newspapers, which has served as a time capsule to keep many of the items in good condition. Whether or not that was the intent at the time, we’ll never be sure.

Minister Hinchliffe said Queensland Rail planned to showcase the items to the public in the near future.

“I look forward to seeing what other connections our community may find to the pieces,” he said.

“Once the items were found by Queensland Rail workers, during the preliminary site investigations, specialist consultants, Niche Environment and Heritage, were engaged to assist Queensland Rail to safely remove the items from the subfloor and catalogue them.

“Ensuring these items are addressed with care is extremely important and Queensland Rail is continuing to work with the consultants to determine the items’ historical value and ensure they’re appropriately preserved.”

Mr Hinchliffe said that in addition to the historical items, Queensland Rail had unfortunately also found unexpected structural issues with the station building, which will need to be addressed as part of the restoration project.

“This project will require significant repairs to the station building’s foundations and walls, as well as replacing the roof, cleaning and painting surfaces, and restoring the air raid shelter.

“The project also included the construction of a new staff facility for our train crew, which was completed last October.

“The temporary ticket office and new platform access to the west of the station building will remain in place while the restoration works continue.

“We’re committed to continuing to engage with the community about the restoration project and look forward to providing an update on the final scope and timing of works once Queensland Rail’s final investigations are complete.”