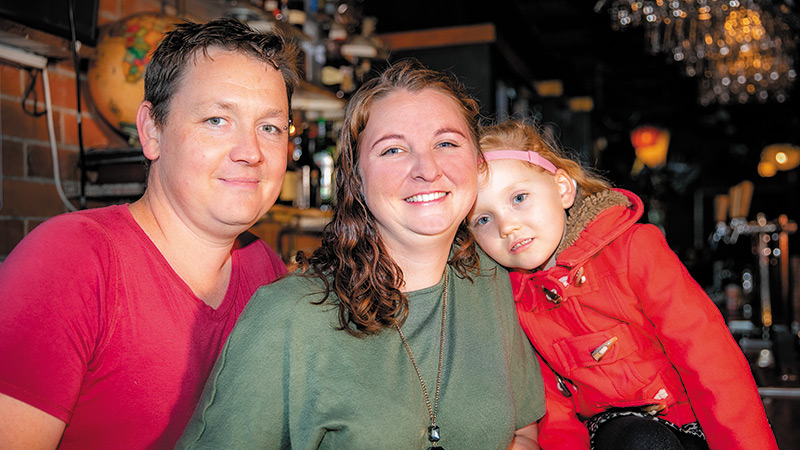 Parents everywhere wish for only one thing – a healthy child. But for local couple Dan and Sabrina Roberts, that has not been the case.

Their daughter Savannah was diagnosed with the rare Smith Magenis Syndrome (SMS) when she was just three months old. It’s a complex neurodevelopmental disorder that affects only one in 25,000 people.

“Savannah’s birth was fine, but then she failed to thrive,” Sabrina said. “It was a hard road those first three months to get a diagnosis.”

Dan said the condition is so rare, few people have even heard of it. “We were told basically, don’t Google it, as it’s too overwhelming,” he said.

“Savannah still wears a nappy and she has difficulty communicating — we’re all learning Auslan (sign language) so we can communicate better.

“Sleep is an issue as well. Normally people produce melatonin at night, which helps you to sleep, but with SMS, it’s produced during the day. So, Savannah is asking to go to bed at 6pm, but then she’s awake again at 9pm, midnight, 3.30am.

“The (sleep deprivation) is just the norm for us now.” The couple have two younger daughters as well, aged five and two. The family is working to raise $20,000 to provide an assistance dog for Savannah.

“The dog will give her some comfort during the night,” Sabrina said. “We hope the dog will assist us to go out as a family in a crowded situation, which is something we have trouble with at the moment.”

Cardigan Bar owner Brett Johnson is hosting a trivia night to raise money for the dog. “It’s going to be a great night, there will be prizes and the local community has been fantastic, really coming together to help this local family,” he said.

Dan and Sabrina said they were thrilled with the offer from the Cardigan Bar to host the trivia night.

“We’re just really excited to be able to raise awareness about SMS and people will be able to come along and have fun,” the couple said.

“Savannah is such a beautiful girl and we love her so much.”

To donate to Savannah, please go to: cardiganbar@gmail.com