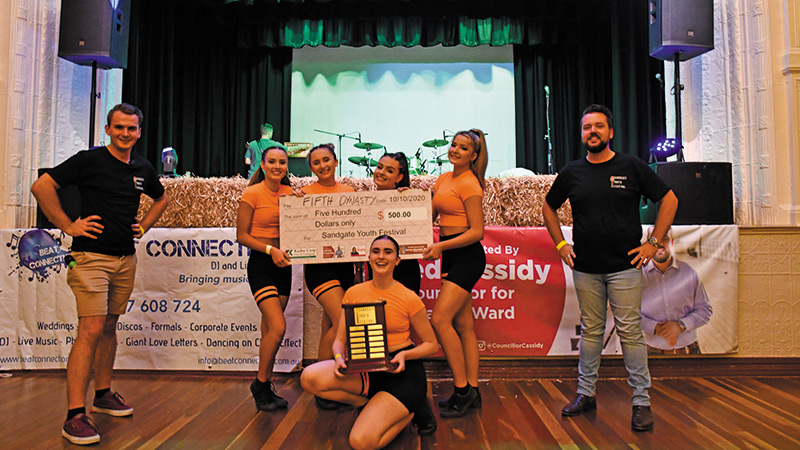 A love of dance and a lot of hard work propelled local group Fifth Dynasty to the winner’s podium at the recent Sandgate Youth Festival.

The five-piece dance troupe, who all attend Aspley State High School, took out the second annual festival, which was livestreamed from the Sandgate Town Hall.

Dancer Emily Walsh said the girls were thrilled with their win. “We were so in shock, it was just surreal,” she said.

“It was very exciting because we had all worked so hard and to get the recognition for that was amazing.

“All the other acts are absolutely amazing, there’s so much talent in this area and it was great to see everyone there listening to each other and encourage each other.”

First prize for the festival winner was $500 cash, alongside a 12-month membership to Q Music and a recording contract with Red Music.

“We gave the recording contract to Joe Beveridge who came in second place, he was so incredible,” Emily said.

Deagon Ward Councillor Jared Cassidy said the festival had been a huge success, despite not being able to have a live audience due to COVID-19 restrictions. “This festival was too important, it really had to go ahead,” Cr Cassidy said.

“Most, if not all, of these young people have not had a platform to perform this year. The feedback from the performers was that their experience on stage was fantastic, the acoustics in the town hall are really amazing.

“The livestream feed did drop out a few times, but people went back and watched it again. We’ve had more than 9,000 views.”

“Music is a powerful tool for bringing the community together. And next year, even if we can have an actual gig again, we will still be livestreaming the festival as well.”

Fifth Dynasty are hoping to perform more as COVID restrictions lift, and they will also be headlining next year’s Sandgate Youth Festival.