Musos Of Sandgate – Where Are They Now? 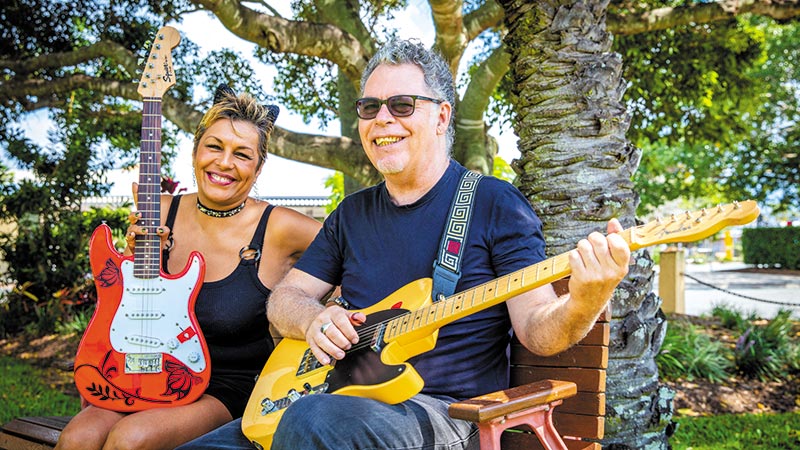 Our humble seaside town has grown so much since my 70s childhood here. When the Sacred Heart nuns discovered my talents, I had to sing the 10 Commandments through the school PA every Monday, and I soon became the go-to girl for anything vocal, to the glory of God.

A friend of my brother, Coojee and I recall swimming in Cabbage Tree Creek and walking on the railway tracks.

“I want to be an entertainer,” fell often from my childish lips, apparently, and that’s exactly what I’ve done since 1981, alongside a day job.  Since going full-time in 2011, I proudly carry the torch for older female musicians, performing jazz, rock, RnB or country, as vocalist for Body and Soul or Missy Vader Duos.

Finishing senior at Sandgate High School, its focus on music productions and talent quests helped me turn pro at barely 16, rocking out with a seven-piece band on weekends.

Since the February 2020 ‘gig crash’, a handful of small-paying underground gigs has kept me from total sadness at lost earnings.

Coojee’s career as an in-demand drummer, hired by a host of great artists including Mojo Webb, has also stalled, as venues cancelled or downsized their entertainment offerings.

“The gig crash means more time with my two young daughters, being grateful for my day job, and reminiscing about past gigs,” Coojee said.

The Music By The Sea concerts and supportive venues like the Cardigan Bar have kept live music going in the area, and we wish them well.

As I write, we are about to go into the first lockdown of 2021, dashing hopes of so many who rely on music or hospitality for work.

From two people whose careers started in Sandgate, we thank all live music venues, and encourage folk to support them, for without their vision and commitment, the music dies.