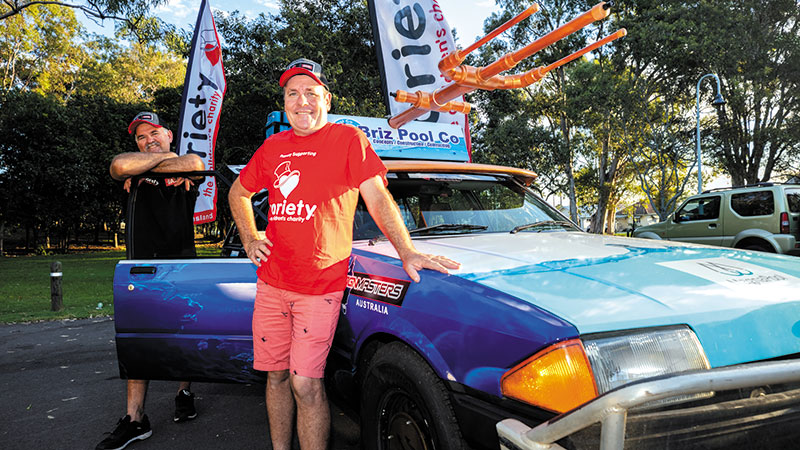 Thumping around the outback in an ageing car might not be everyone’s cup of tea, but for Jim Herold it’s a chance to give back to the regional areas of Queensland he loves so much.

Jim and mates Jamie Holmes, Peter Kennedy, and Steve Winfield have joined forces to become the Kings of Atlantis for this year’s Variety Bash.

The charity road event runs for almost two weeks and drivers will cover a total of 4500 kilometres.

“I first sponsored a car in the Bash in 2017 and I met up with them all at the end of it in Airlie Beach, and I just thought, ‘this is what I want to do one day’,” he said.

“Our team is called the Kings of Atlantis because we’re all in the pool industry, all small business owners, and we’ve just banded together.”

The crew will be driving a 1982 XE Falcon station wagon, and their goal is to raise $25,000, with all the money going to the children’s charity, Variety.

“All the funds raised goes to outback kids, so it might be new computers, or facilities, or a trip away,” Jim said.

“I come from the bush myself; I’m from Gin Gin – that’s my home town, so I know what it’s like growing up in a regional area.

“Just to put a smile on the kids’ faces, this is all about the kids and giving them something to look forward to or to keep them going.”

He added drought, fires, floods and COVID had combined to make it a “rough time” in the bush.

“I mean, they’re a resilient bunch out there, but kids need something to look forward to,” Jim said.

The Variety Bash starts on 30 August at Winton, taking in seven stops in all, including the Birdsville Races, before finishing in Yeppoon.

“There’s still room on the car for corporate sponsors and we’re holding a raffle and selling stubby coolers,” Jim said.

“It’s all happening and we’re very excited about being involved.”

To donate to the team, visit: www.varietybashqld.com.au/k...