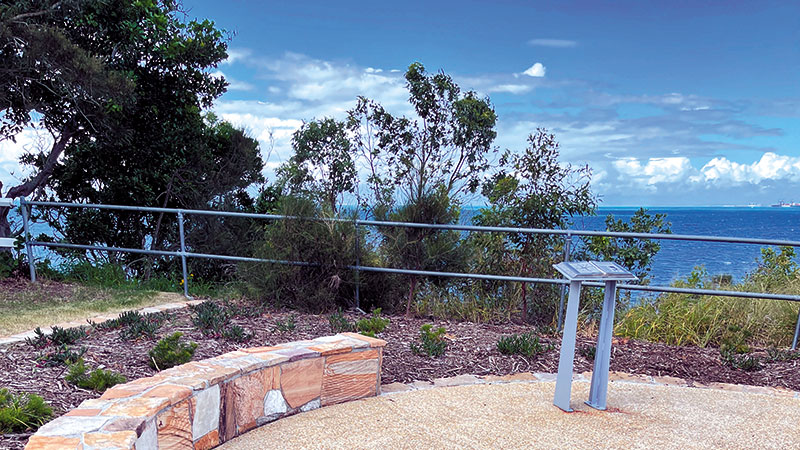 Restoration works have been undertaken to update the John Oxley Memorial at Shorncliffe, with further upgrade works expected to provide shade for visitors as well as information about the history of the area.

The memorial was installed by Council at the top of Allpass Parade in 2003 following a proposal made by Keep Sandgate Beautiful Association (KSBA) to commemorate Oxley’s stopover at the location on his way to the Brisbane River.

Refurbishment of the memorial began in February 2021, and included cleaning the sandstone walls and access paths, constructing new gardens, replacing seating, and updating the book, which contains an excerpt from Oxley’s diary about his arrival in Shorncliffe.

Councillor Jared Cassidy said he had been working with KSBA for a number of years now on this project.

“Ultimately, what we would like to see is a much more interesting and informative memorial that teaches people both about John Oxley and his journey around Brisbane and Moreton Bay, but also our Aboriginal history before settlement,” Jared said.

In 1823, Governor Brisbane gave instructions to the Surveyor General, John Oxley, to assess what is now known as Bowen, Gladstone, and Moreton Bay as potential locations for a new convict settlement.

These men would likely to have perished had they not been cared for by the Quandamooka people, who gave them food, shelter, and medical treatment for many months.

Pamphlett and Finnegan showed Oxley how to find Maiwar (the Brisbane River). Part of Oxley’s journey involved camping overnight at what is now Cabbage Tree Creek at Shorncliffe, near to where the memorial is situated.

Jared said the next stages of the upgrade would include more shade, seating, and interpretative storyboards telling the history of the local area.

“I think with these improvements and upgrades this whole area will become a great space for local schools, community groups, and locals to enjoy and learn a bit about where we live,” Jared said.

“Funding for the next stages will be sought in the coming financial year.”