Rock Under The Clock Revival 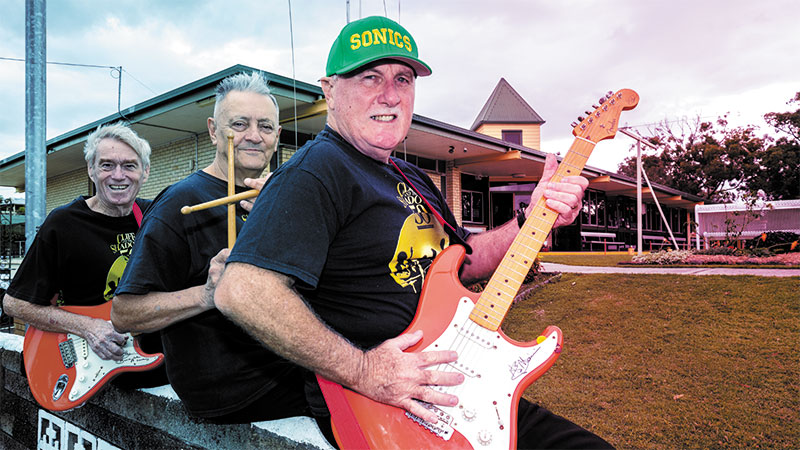 Put your glad rags on and get ready to rock — 4017’s iconic Rock Under the Clock is back, bigger and better than ever.

After ‘rockdown’ in 2020, this key event on the region’s rock’n’roll calendar has a new venue for 2021 – The Sandgate Bowls Club – moving from its original home at the Sandgate Town Hall because of attendance restrictions.

While the venue may have changed, the tunes certainly have not. Renowned rock’n’roll band The Sonics, led by vocalist Jim Hansen, will entertain the crowd with late 1950s and 1960s music from Australia, the USA, and the UK.

“The emphasis on this particular event is rock’n’roll revival,” said Sonics guitarist Rod Kippen, who said the music appealed to a wide group of people.

“ We do get a lot of younger people that like rock’n’roll dancing, and the older generation just want to relive this nostalgic time,” he said.

The Sonics originated back in 1961, when four Sandgate teenagers from the same class at Sandgate High School got together. They adopted the Sandgate Town Hall as their preferred venue, playing at dances under the banner Rock Under the Clock.

The band reincarnated the Rock Under the Clock theme – named in reverence to the first rock’n’roll record, The Comets’ Rock Around The Clock – in 2014, with two events held every year since then (except in 2020) at the town hall.

As has been the case in previous years, all proceeds from the night will go to the Sandgate PCYC’s youth development programs. The event has raised more than $80,000 in the last seven years.

Rod said the new venue promised to be the perfect alternative to host this year’s event, which draws a crowd from across the south-east.

“The bowls club is bigger than the town hall so we can have more people attend,” he said. “We’re able to observe social distancing at the same time and put in place all of the necessary COVID protocols.”

There will be a supper service, a fully licensed bar, and coffee and tea available. Bookings are essential. For more information and to purchase your ticket, visit www.trybooking.com/729079