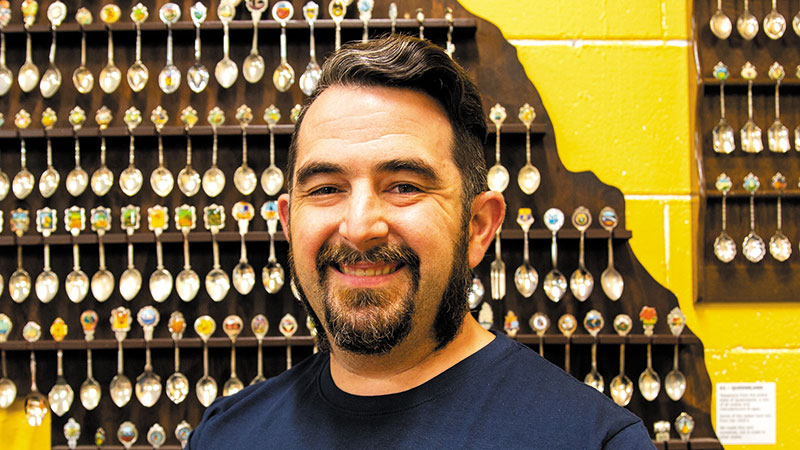 There’s more than a teaspoon full of love in the 4017’s latest attraction. Spoonarama – Queensland’s largest display of souvenir teaspoons – has opened at Round Table Coffee in Bracken Ridge.

Owner Jeremy Jucha said the teaspoon collection “kind of happened by accident”. “We’ve been here seven years now and we’ve always had souvenir spoons at the café,” he said.

“They became a bit of a talking point and people just kept on donating them to us – whole collections sometimes, from their grandmother’s house or their parents.”

The café had a three-day souvenir teaspoon exhibit a couple of years ago, and now Jeremy has expanded into a space next to the café, making it a permanent display.

“People ask me all the time what they’re worth, but their value to me is really in where they came from and who they belonged to.”

The teaspoons are displayed in a range of different sections including schools, states, holiday spots, and international spoons from locations including Europe, the US and New Zealand.

“We have a rack of our favourite spoons as well, ones that have a sentimental meaning for us,” Jeremy said.

“It’s taken my wife Allie and I about 250 hours to get the whole together and we will add more as time goes on.

“I’ve been contacted by a bloke in Perth who has 15,000 spoons and another bloke in Sydney who has twice that.

“If we were able to get those collections, we’d have to think about expanding again – and that’s getting into Guinness World Record territory.”

Jeremy added spoon collecting was becoming a dying art form, with one of the oldest teaspoons in the collection dating from the 1920s.

“It’s just not something you see much of anymore, there even used to be spoon clubs although they’ve all finished up now,” he said.

“It used to be that you would do a big drive, pull up in every little town and buy a spoon at each stop.”

Spoonarama is open Mondays, Wednesdays and Fridays from 10am to 2pm, and on Saturdays from 8am to noon at Round Table Coffee, 3/67 Gawain Road, Bracken Ridge. Entry is free.