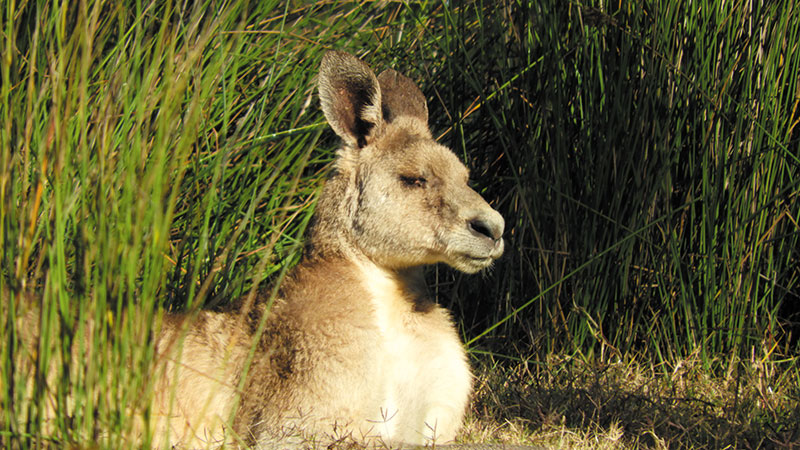 Wildlife movement solutions that provide safer transport paths for local kangaroos and other animals will be assessed in the planning stages of a $2.1 billion upgrade to the Gateway Motorway and Bruce Highway.

Conservation groups in 4017 have presented their views to the project team on how a proposed upgrade to the motorway between Bracken Ridge and Pine River would impact existing wildlife habitats.

Jacky Overington from Brighton Kangaroos said she hoped wildlife bridges would be built as part of the project, particularly for eastern grey kangaroos and wildlife living in the Tinchi Tamba Wetlands.

“There is an opportunity during this road project to restore the ability of wildlife to move between remnant bushland safely and in a way that means we never have to see a traffic crash with a kangaroo again,” Jacky said.

“There are approximately 280 kangaroos living in Tinchi Tamba and smaller mobs in Deagon Wetlands, Peace Park and Brighton Wetlands.”

Jacky said Brighton Kangaroos and other groups had been invited to participate in community consultation.

“We went to the meetings and presented our information. We gave them the data about how many kangaroos we know have been hit on the Deagon Deviation in the last couple of years, which is something that’s completely avoidable,” Jacky said.

“We would like them to build an overpass for our animals rather than send them into a little pocket or let them cross roads where they get run over.”

A Transport and Main Roads spokesperson said an environmental assessment would be completed as part of the business case phase.

“Investigations made, as part of our planning, will confirm fauna in the local area and potential preferred wildlife movements in relation to the project footprint,” the spokesperson said.

“This will be further assessed during the business case and we will look at ways the road can be designed to minimise impacts on wildlife and natural habitat.

“Community engagement will be ongoing with further active consultation sessions to be held as planning progresses. The feedback already provided by the community, including that from the Brighton Kangaroos, is being considered as part of the planning.”

Jacky said she was hoping for the best outcome.

“We know our community loves our kangaroos and has an expectation of the State Government to ensure the future safety and survival of our wildlife,” she said.

“I think the community has obtained some good outcomes for wildlife in the past four to five years and I hope we continue to see that into the future.”

The business cases for the upgrades are to be completed in 2023.

The community can provide feedback by emailing the Gateway Motorway Bruce Highway Upgrade project team on GMBHU@tmr.qld.gov.au or calling 1800 607 755.