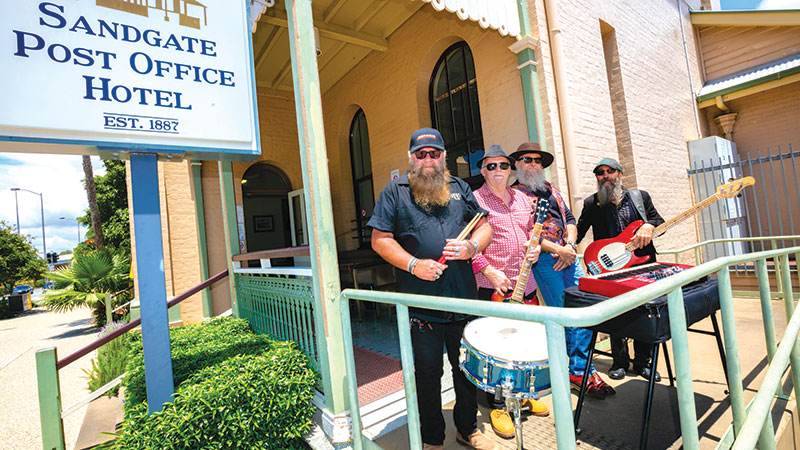 Say cheers to New Year's by dancing the night away to your favourite rock songs.

Party until the clock strikes midnight (and beyond) when The Mulhoons Band play the Sandgate Post Office Hotel this New Year's Eve.

Drummer and back-up vocalist Graham James said the band performed regularly at the hotel before COVID hit, but this was the first time they'd played on New Year's Eve.

We have a bit of a following who are quite excited we are doing New Year's,ť Graham said.

They come to all the Sandgate gigs ' a rock and roll dance crew that is usually 10 to 12 people. This time we are looking forward to playing in the Chandelier Room upstairs where they have a bigger dance floor.ť

The Mulhoons Band are experienced musicians from the Northside and Sunshine Coast who have been playing together for four years. Joining Graham is lead guitarist and vocalist Paul Thompson, bass player and vocalist Daryl James, and keyboardist and vocalist Brad Andersen.

We share a common interest in playing our favourite songs. We have a similar liking for the same sort of music and we all contribute to the song list. We've got quite a good array of songs we've put together over the four years and we get people dancing,ť Graham said.

We do seventies, eighties and nineties rock and roll like Paul Kelly, U2 and The Eagles. We do a Pink Floyd song that goes over really well, and Suspicious Minds by Elvis. We also do some slower stuff like Moondance by Van Morrison.ť

The band kicks off at 8pm and party goers pay a $5 entry fee at the door. Sittings for dinner start at 5pm. The kitchen will be open until 9pm, so everyone can ring in the new year with a delicious meal.

We get a friendly crowd and because it's local we get friends who come,ť he said.

We are looking forward to having our usual Sandgate crowd there and for them to be dancing the night away like they do whenever we play there.ť

Bookings are essential. Contact the Sandgate Post Office Hotel on ph. 3689 0606 to book, or online at www.sandgatepostofficehotel...