Walking Football Takes To The Field In Sandgate 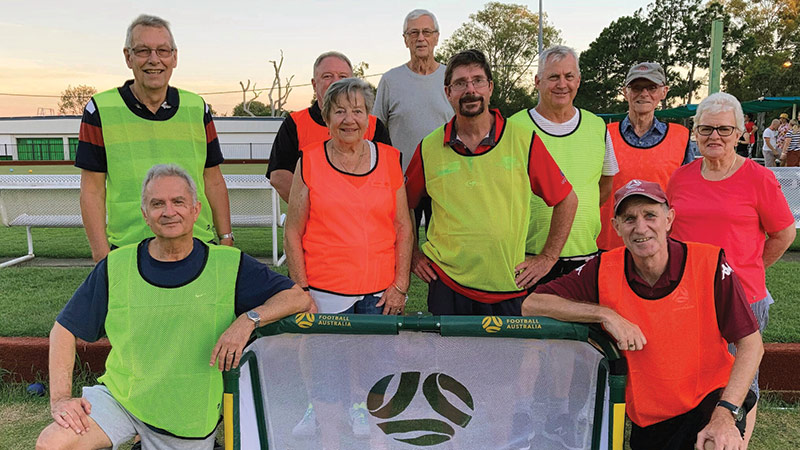 One of the world’s fast-growing sports has gained a foothold in Sandgate, with potential to change lives along the way.

Walking football is a slowed down, minimal contact version of regular football (soccer) aimed at, but not limited to, the over 50s.

Health experts are excited by the physical and mental benefits of the game, which has the backing of Football Queensland and A-League outfit the Brisbane Roar.

Former players are moving back to this game, which is also attracting people who have never played before, but who are looking for an easy, fun way to boost their fitness.

A local team based at Sandgate Bowls Club and the Brighton Health Campus has been organised by football fan Helena Winter, who’s excited by the prospects of the walking version of the world game.

“All players are welcome, of all ages and abilities,” says Helena. “And mixed teams are very prominent, it’s not purely for men.

“I love football, I’ve been involved most of my adult life, and as soon as I saw this I thought it would be brilliant.”

The game originated in the UK and has quickly spread through Europe and further afield. It has now reached international competition status, with mature age players representing their countries at that level.

Major clubs in the UK are involved in walking football, aware of the physical and mental health benefits alongside the social side of the activity, which is helping people break out of the isolation forced on them by Covid lockdown.

The Sandgate footballers, playing under the name Bright-N-Breezy, meet and play at Sandgate Bowls Club on Friday evenings, kicking off around 6pm. There are plans for a further session on Mondays at Brighton Health Campus, which has added its support.

Confirmation of games, venues and other news can be found on the group’s Facebook page, brightonsandgatewalkingfootball.

Hellena, who is in her late 70s, adds: “This has taken off everywhere else - I can’t see it not taking off here. And if my age group can do it there’s no reason why 50 to 70 year olds can’t.”