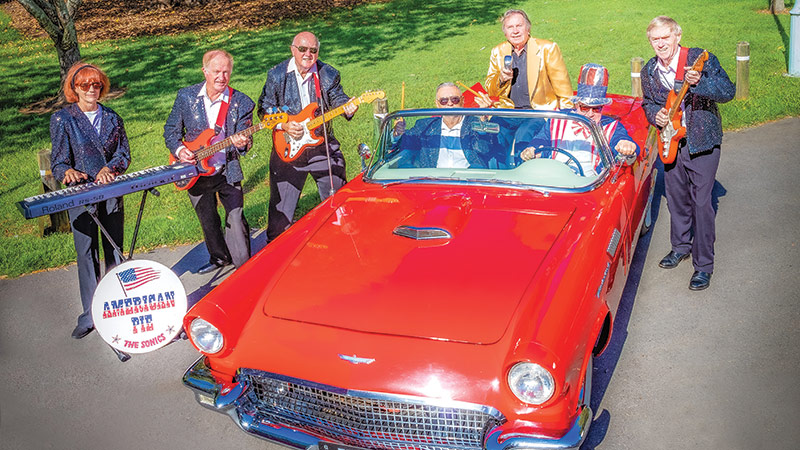 There’s no need to drive your “Chevy to the levee” because ‘American Pie’ will rock the Sandgate Bowls Club this month!

The first of the biannual ‘Rock under the Clock’ events, American Pie - The Birth of Rock & Roll, will be held on Saturday May 28. Jim Hansen and The Sonics will bring back the golden rock & roll era of the late 1950’s and 60’s.

The Sonics are Sandgates very own, originally formed in 1961 and later revived in 2012. The American Pie program includes the hits of Elvis, Bill Haley & The Comets, Buddy Holly and the Everly Brothers.

Songstress Nicky Steel will feature as guest vocalist to revive some of the popular female artists of the era including Carole King, Connie Francis, Brenda Lee and Lesley Gore.

“Of all our events, American Pie represents the most meaningful portrayal of what we are about. It’s the opportunity for our guests to reminisce and revel in the music of an era never forgotten,” said Rod Kippen, Chairman of the Rock Under the Clock organisation team.

“The cryptic lyrics of Don McLean’s song brilliantly portrays the evolution of an enduring phenomenon in music, and so becomes a fitting anthem for our night of song and dance,” he said.

Garry McDonald, lead guitarist of The Sonics said, “We have been careful to plan our program to ensure it covers the formative years of rock & roll and pays tribute to those recording artists who had the greatest influence on the evolution of this musical phenomenon.”

“These early rock & roll songs are what I grew up with as a kid, and are therefore very special to me. They inspired me to buy my first guitar, and later to form The Sonics while in high school.”

To add to the authenticity of the night, a display of American classic cars of the 1950’s and 60’s will greet everyone on arrival.

The primary beneficiary of Rock under the Clock is the Queensland Police Blue Light / Blue Edge initiative. The not for profit charity uses physical training as a tool to teach young people discipline, goal setting and teamwork with the added benefit of improved mental health.

So put on your blue suede shoes and head down to the Sandgate Bowls Club to dance the night away.