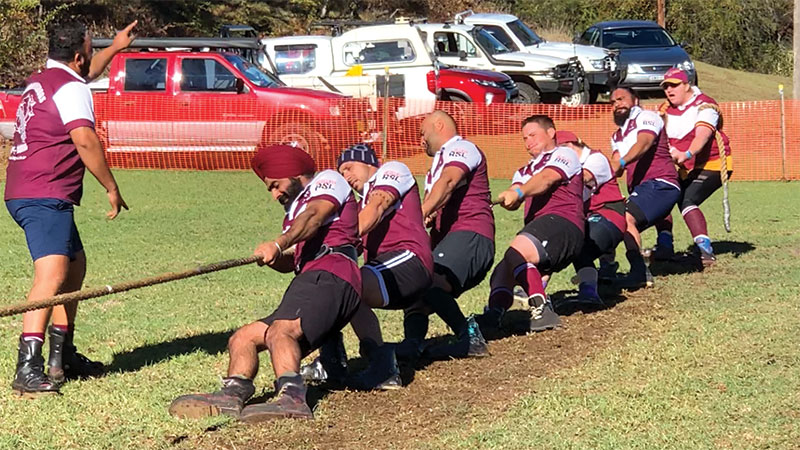 Did you know that the school-yard game of Tug-O-War has become a national sport?

Requiring stability, strength, stamina and endurance, the game has become very competitive, with the 2022 Nationals being held this August at the Backyard Bonanza in Bracken Ridge. And it’s got a lot to do with the Brisbane Bulldogs Tug-O-War founder and team coach, Graham Egan.

“Tug-O-War was a regular pastime and exercise drill when I was in the army. I was first  introduced to Tug-O-War when I was stationed in Malaysia in 1968. When I got out of the army, I needed something to keep me fit, so I decided to use Tug-O-War as part of my fitness regime.” Graham said.

More than 50 years later, the 74 year old Vietnam veteran is still using TOW to keep fit, starting the Brisbane Bulldogs team back in 2002. They are set to compete at the 2022 Australian National Tug-O-War Championships, and hope to take several teams to the competition.

“There are six people to a team, which are made up of up to eight weight divisions and a mixed division, to foster more involvement of women. Back in the 90’s we had all female teams. So now we are hoping more females will give the sport a go,” he said.

Graham went on to add that a great way to encourage kids to try out for TOW, is to come and watch the Army Cadets who, along with several Queensland based army teams, will be holding their own competitions over the weekend.

Graham added the highlights of TOW is the challenge of getting six grown men together and forcing them in a direction they don’t want to go.

“It’s almost like, in the good old days, the best way to fix a broken down car was getting everyone together to get the car going. Everyone would push and pull and work as a team to get the car running again.

“It’s that main ingredient of working as a team, if you don’t, you lose.”

The Brisbane Bulldogs are currently recruiting new team members. “Come down for a chat and have a training session. We are looking for fitness buffs, tradies, gym-goers etc to come and try out. We would love to add more teams to our squad for Nationals.”

The Backyard Bonanza is hoping to attract up to 10,000 visitors this year, with 2022 the first time Tug-O-War has been included, and according to Graham is “the most important attraction of the weekend.”