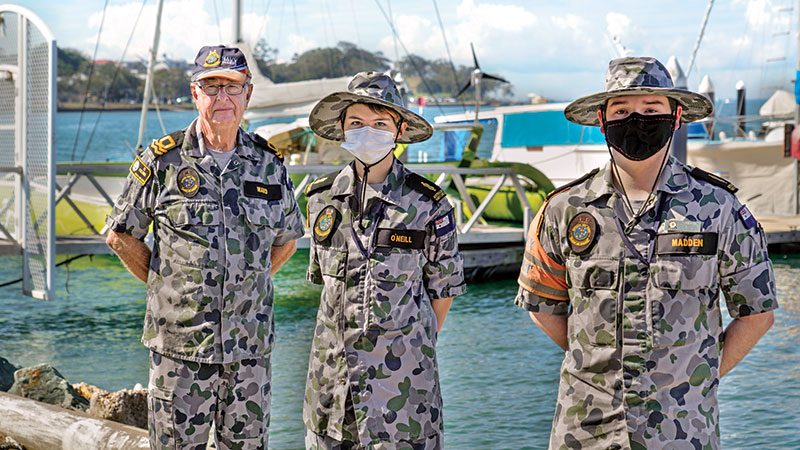 The Australian Naval Cadets can be an adventurous way for local teenagers to learn lifelong skills – and maybe even find a career.

There are 4,000 cadets in 99 cadet units across the country, including TS Paluma at Shorncliffe.  Commanding Officer Mervyn Ward, a cadet instructor for over fifteen years, said young people could gain valuable skills while learning about the navy.

“Our activities are based around life in the navy. Sailing, power boating and canoes are used during the summer months, and our winter months revolve around the land-based activities such as rope work, parade, and rifle drill,” he said.

“The cadets also learn action-based activities that teach them the leadership skills that take them through the promotion and higher ranks, no different to the navy.”

The program at TS Paluma is open to young people aged thirteen to eighteen, all year round. Each cadet goes through an induction and is then integrated into the rank structure.

While it’s a program that stands on its own, Mervyn said cadets sometimes go on to join the navy or army as adults.

“I am happy this is a starting point for these young people who are interested in a life in defence, and we see about two to three cadets go on to join either service each year. We find this sort of integration brings the best out of each of them,” he said.

“They want to be there, no one is making them, and it’s all a challenge to do their best. The leadership challenge to get out in front of a squad and give instructions takes some nerves but they all do it.”

Mervyn said the cadets were active in the community through events such as Anzac Day. They sometimes also partner with the Volunteer Marine Rescue and the Queensland Cruising Yacht Club – the unit’s next door neighbours.

“The cadets in the community are seen as related to defence personnel and therefore maintain a high profile in dress and standards,” Mervyn said.

“This is one thing I am proud of, and I enjoy seeing the changes in my cadets.”

For more information go to www.navycadets.gov.au