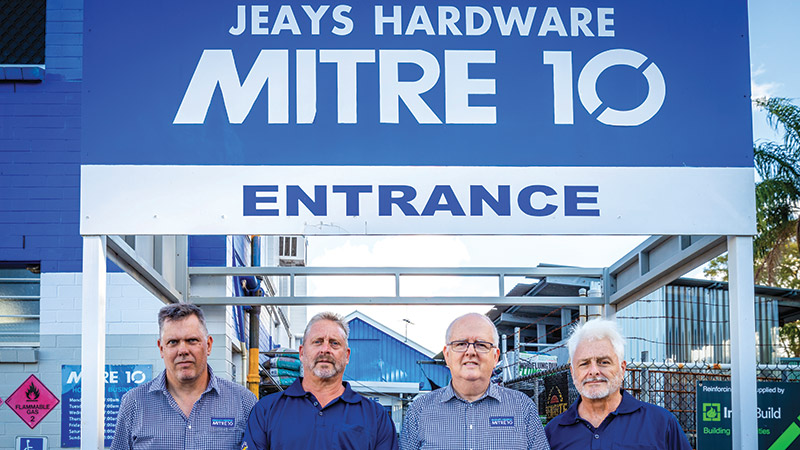 Sandgate resident Charles Jeays opened the store in Albert Street in Brisbane in 1922, joined by his brothers Joe, Arthur and Albert. After the Second World War, they relocated the business to Sandgate.

Managing director Charlie Jeays is Charles’ grandson and has been working for the business since 1977.

“It’s been an honour for me to carry on the tradition of the family,” Charlie said.

“My grandpa died in 1956, so I was only three, and I vaguely remember a big, jolly happy fellow. But I well remember his brothers. Uncle Arthur had a bad limp because he copped a machine gun bullet in the hip in the First World War. He used to be a driver and he always used to wear a suit and hat to work.

“Dad started in 1935 as a 15-year-old boy and he tells some of the stories of how the corrugated iron used to come on a horse drawn wagon. The worst thing was the concrete washing tubs and they were back breakers.”

Charlie’s father, Albert, became manager after Charles died In 1962, he played a role in the business joining the Mitre 10 Group.

“Arthur Scurr was the real driver of Mitre 10 in Queensland,” Charlie said. “He and dad and some others were involved in driving around and talking to independents about getting the group going up here.”

Jeays is now the only remaining original Mitre 10 store.

Charlie took over the reins when Albert retired in 1985, and oversaw changes like the transition to computerised stock and accounts.

The family are descended from English carpenter Joshua Jeays, who immigrated to Moreton Bay with his family in 1853. He went on to build the Old Government House and become mayor of Brisbane.

Jeays has a history of long-serving staff, including Charlie’s brothers, Peter and Richard, who specialise in the auto section, general manager Ian Everest, and operations manager Troy Pfingst.

“We have tried to engender in people when they come to work that they are coming to a family business,” Charlie said.

“The main thing we have insisted on is integrity in dealings with staff and customers in line with the founder’s philosophy. That’s helped us create the business and it’s drawn the customers, to enable us to be there for 100 years.”

To learn more about the history of Jeays Hardware visit www.jeayshardware.com/ourhi...