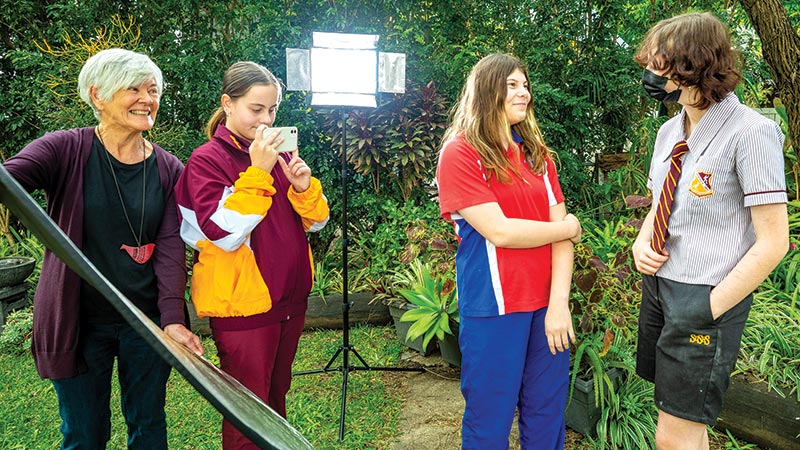 Stuffit Film Festival is a competition that originated in Nambour and now has international input. The competition is aimed at high school students who are required to make a film of up to 15 minutes with all the work being done by the students.

A group of high school students have been meeting at Womenspace Sandgate and in just 10 afternoons, have made a film to submit to the competition.

Secretary of Womenspace, Ann Ingamells, said the project has fostered relationships and has allowed the young women to collaborate on a creative level.

“When they began, they were new to Womenspace and did not know each other. So they have been developing relationships as they go, and working on the film together,” Ann said.

“The final product is a film about making a film. It shows how they ensured they all had a part, what they did and learned along the way, and the kinds of interests that the girls making the film have. It is quirky, creative and fun.”

Bree-Ella Davidson, from Aspley State High School, is one of the young women who has been participating in getting the film ready for the competition.

“The film is like a documentary, a look behind the scenes of what we do at the Centre. For me it has been a great experience, I’ve made new friends and it’s helped me to socialise more,” said Bree-Ella.

“I study drama so I’m into the whole acting thing, so that has helped as well.”

This project has offered an opportunity for women of an older generation and younger women to meet at and learn from each other and work collaboratively to see the development of the film from conception through to the final entry into the Film Festival.

The Young Women’s Project at Womenspace happens with the support of a grant from the Brisbane City Council Lord Mayor’s Fund. The local community will be able to see the film at the Womenspace Anniversary celebrations on the weekend on 24 and 25 September with the winner being announced in October.